The site and Centre include the 6th Century inscribed stone at Slaughterbridge in North Cornwall. The area next to the Centre is known as Camlann - the legendary site of King Arthur's last battle

The Vale of Avalon/ Arthurian Centre dedicated to telling the 'story behind the stories' of King Arthur in Cornwall alongside Cornish history and legends. The information itself has been updated recently after extensive research over more than 20 years.

Joe Parsons explains : “ We wanted to fire the imagination and stimulate thinking. People have always argued over Arthur and will do so long after we are gone. There is much truth underlying all the stories of dragons, damsels, magic, knights and honour.

To me, the King Arthur legend strikes responsive chords that are just as contemporarily important today as they have been in any age. It projects an ageless symbolism that everyone enjoys and relates to because they recognise aspects of their own personality within it. More recently Star Wars’ used the themes and archetypes to good effect!”.

The legend is a collection of gripping stories told against a background of clashing cultures and religious ideas all illuminated by great works of art, music and poetry.

As regards the area itself the site was mentioned in the Domesday book of 1086 and brought to the nation’s attention by Geoffrey of Monmouth, along with Tintagel Castle, in 1136AD
The 6th century stone lying here on the Camel riverbank is a memorial to British, high status leaders based in the Tintagel/ Camelford area 1500 years ago.

The Domesday Book names the Manor this site lies on as – GUERDEVALAN ( Now Worthyvale). This is a Cornish word meaning ‘The Place/Vale of Apples’. This is the earliest reference to Avalon on the site identified as Camlann by Geoffrey of Monmouth in 1136 and site of the 6th century memorial - can this just be coincidence?! 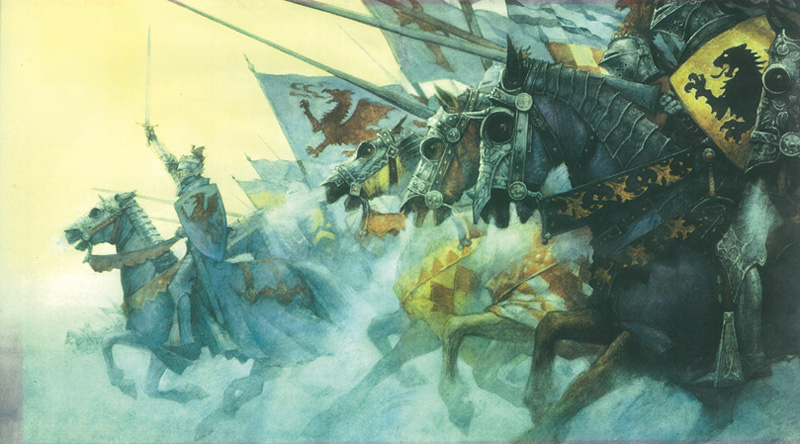 “Arthur started in all haste on his march to Cornwall...at the River Camel where Mordred was awaiting his arrival” Geoffrey of Monmouth, History of the kings of Britain, 1136AD. 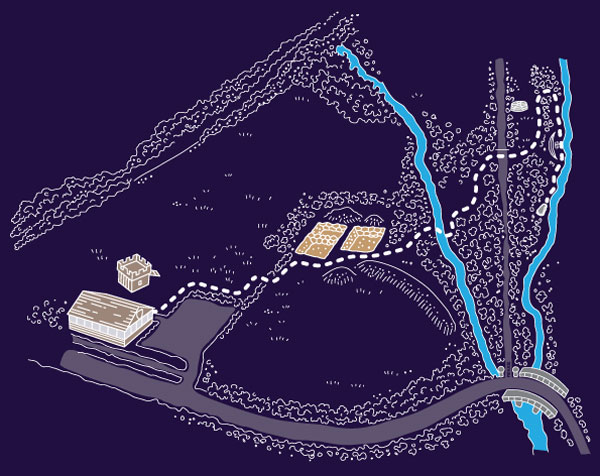 The exhibition room is sited near to the 6th Century inscribed stone at Slaughterbridge in North Cornwall. More information is now presented on new boards around the site.

The information itself has been updated recently after extensive research over more than 20 years.

This is the only place dedicated to telling the 'story behind the stories' of King Arthur in Cornwall.

Joe Parsons explains : “ We wanted to fire the imagination and stimulate thinking. People have always argued over Arthur and will do so long after we are gone. There is much truth underlying all the stories of dragons, damsels, magic and derring do.

To me, the King Arthur legend strikes responsive chords that are just as contemporarily important today as they have been in any age. It projects an ageless symbolism that everyone enjoys and relates to because they recognise aspects of their own personality within it. Even Star Wars’ used it to good effect!”.

The legend is a collection of gripping stories told against a background of clashing cultures and religious ideas all illuminated by great works of art, music and poetry. 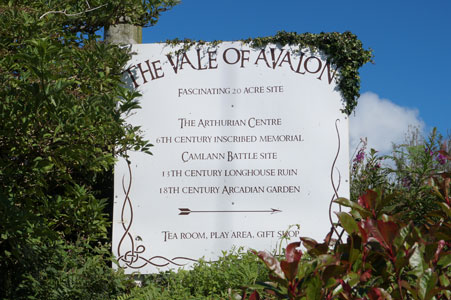 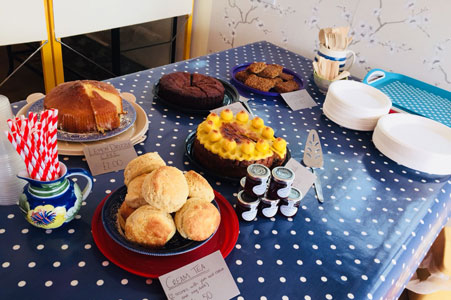 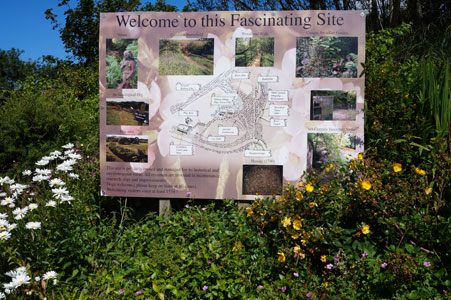 A few years ago two quartz cobbles were exposed when repairs were being undertaken on the visitor path. Research then revealed a reference to Lady Dowager Falmouth having created a garden around the 6th century King Arthur’s Stone, next to the Camel River ‘ some years before the writer saw it’ ( 1754).

In 2004 we started to look for clues. More and more cobbles were exposed and in 2005 a 2m circle was revealed in the centre of the cobbles. Within the circle a crescent of nine quartz cobbles complete the mosaic. This would have been visible from a terrace on the cliff above. Immediately behind this circle is a level area in the slight slope of the pavement. To one end of this is a small post hole, which when excavated revealed rusted nails. This suggests the location of a garden seat.

A number of fragments of 18th century bottle glass were found on the pavement surface. Most significantly in a large deposit at the southern end of the site, one had an embossed stamp saying ’N Barriball, White Hart, 1716’. (The N is reversed.). The finding of the bottle on the cobbled surface indicates that the garden may date from the earlier period of Charlotte Boscawen’s (only later Lady Dowager Falmouth) occupation of Worthyvale Manor (c.1700 - 1705 + 1734-1754).

A path lead from a ‘ folly’ on a low mound (a house now occupies the site), via winding paths, rock carved steps and the cliff terraces, one cobbled with quartz with a seat to the centre piece and the reason for the garden being here. In the deepest part of the garden lies (probably once stood) the Arthur Stone in a natural ‘grotto’ beside the River Camel. According to Dr. Tim Mowl, garden historian, the use of an Arthurian feature in this garden is very unusual as it is so early, most such features are in 19th century gardens. She died in 1754 and may not have completed her design. It was soon lost and forgotten.

We have only begun to scrape the surface ( literally) of our very own ‘Secret Garden’. We would love to share this exciting journey of discovery into the past with anyone interested in helping. There is so much to do and if you would like to have a go at digging, washing finds, earth moving etc, please join us and help us learn more about our Lady Falmouth and what inspired her to create a beautiful, romantic garden on the banks of the River Camel 300 years ago.

COME AND SEE THE GARDEN AT THE VERY BEGINNING OF ITS RESTORATION AFTER NEARLY 300 YEARS!! 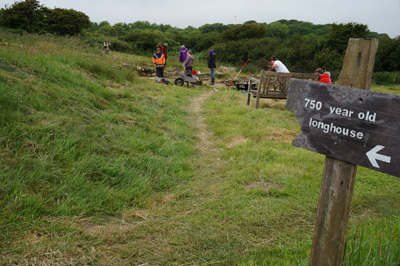 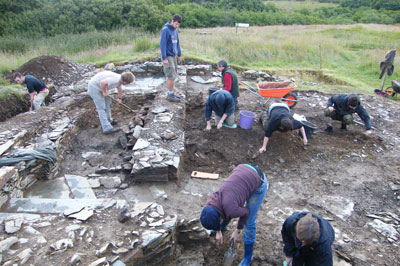 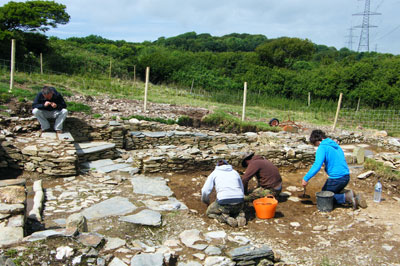 This small field is labelled as "the Battlefield" on old maps, however many battles were fought here fore the hedges were bult. The Battle of Camlann - said to be a civil war between Arthur and his son Mordred took place around 540 AD.

Various relics have been found on this site, and on 1136 Geoffrey of Monmouth identified he site as Camlann. 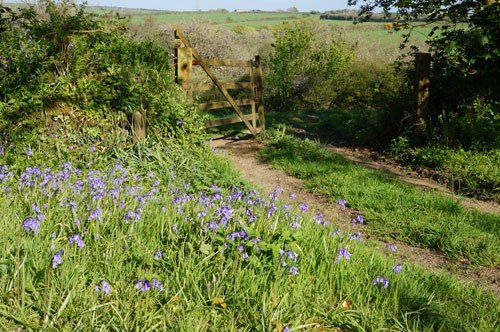 Prior to 1066 this Doomsday Manor was known as 'Guerdevalan' - a Cornish word meaning 'Place Of Apples'. With this in mind Cornish heritage apple trees have been planted here together with a wildflower meadow and grasses.

In the manner of an old orchard trees will be given space to grow and spread and mown paths will create a trail through them. In places along the path characters from legend are commemorated on heraldic shields. 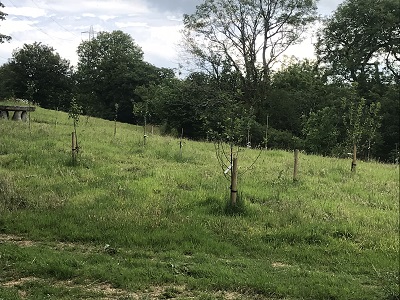 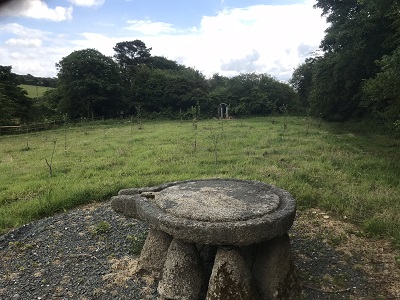 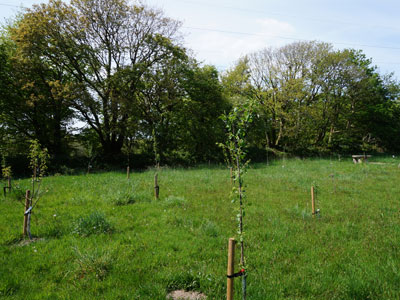 New for 2020 the Muse Garden is a contemplative area designed to reflect the vast inspiration the legends have given to the artistic world. From the poetry of Alfret Lord Tennyson to the Pre-Raphaelite paintings of Edward Burne-Jones.

The garden takes its cue from both the work of Gertrude Jekyll who promoted the natural development of gardens in her designs and books, and the Pre-Raphaelies themselves. Our aim is to create an envirmoent that is romantic, bold and colourful. 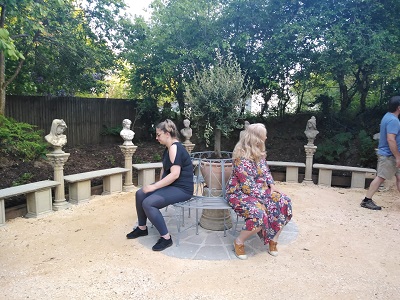 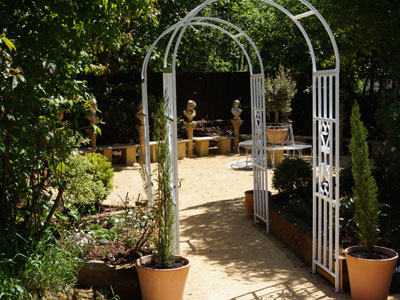 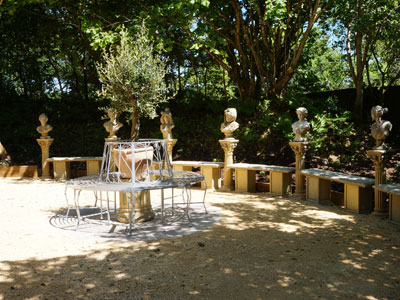 The Inscribed Stone, a nationally important Scheduled Ancient Monument, is on the 'At Risk Register' due to the risk of flood damage by the Camel River.

A comprehensive report has been produced by Attwell Associates to examine past issues, current risks and potential future conservation measures.

The Stone carries a Latin inscription and rare Ogham ( or Ogam), an ancient Celtic script. The Ogham dates the Stone to around the 6th century and indicates the presence of Southern Irish people in North Cornwall at this time. The inscription was further narrowed down to 'approximately 540AD' by Professor Charles Thomas in 1996.

The onward migration of people from Cornwall in to Brittany, moving ahead of the Saxon invaders ( interestingly a decisive battle between the Saxon King Egbert and the Celts might also have been fought over the same land at Slaughter Bridge in the 9th century), was a likely vehicle for the transmission of stories important in Celtic culture. It was this oral tradition that eventually inspired Geoffrey of Monmouth and later Cretien de Troyes, the greatest of the French ‘ Arthurian Romance’ writers of the 12th century.

The inscriptions on this Stone are around 1500 years old. 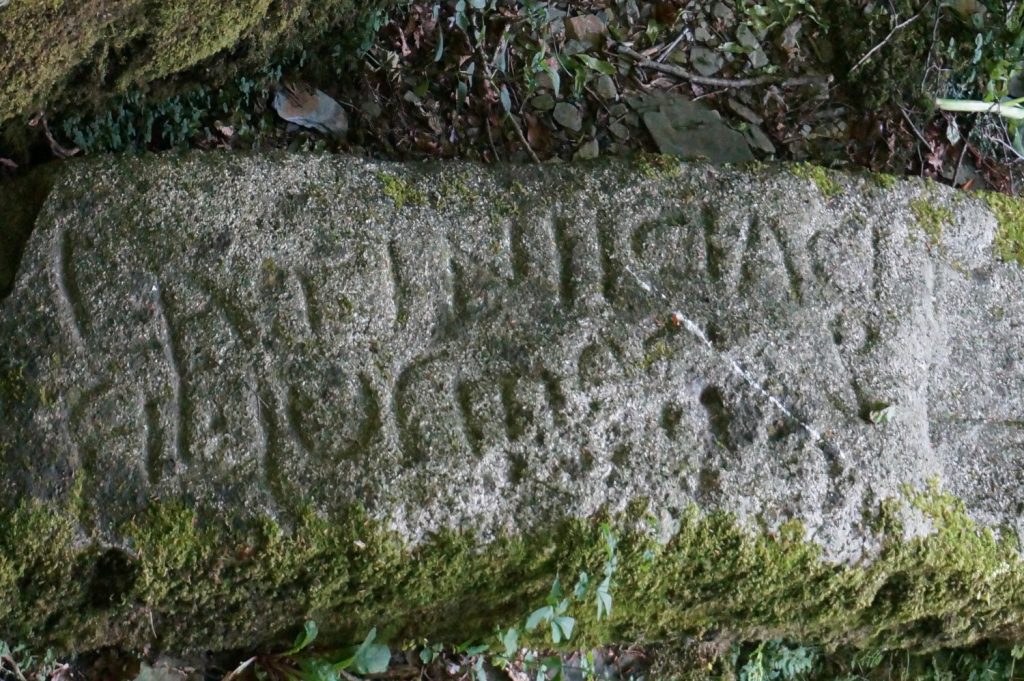 Free and fun interactive map of Cornwall now available on Android and iPhone.
Look for the Avalon Arthurian Cornwall app for information and a guide to the Arthurian sites of Cornwall. 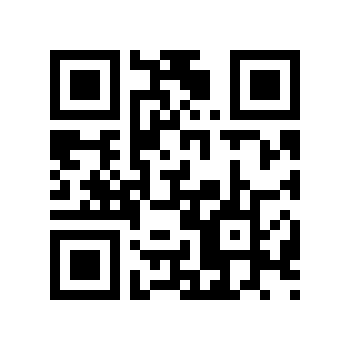 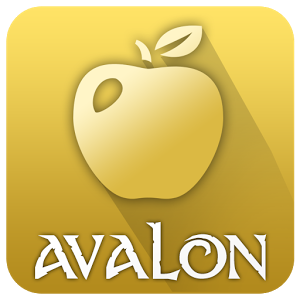 Developed by The Arthurian Heritage Trust and The Vale of Avalon/ Arthurian Centre.